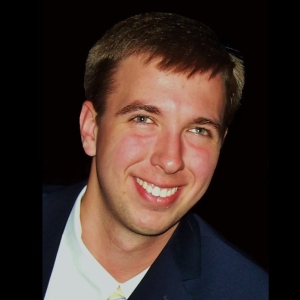 Don may be the baby of the McDermott family, but don’t get the wrong idea . . . he stands an impressive six feet six inches tall and has a personality to match. If he hadn’t decided that writing and singing were the two loves of his life, he might have wound up doing stand-up comedy instead, and regularly keeps his family and friends in stitches with his witty one-liners, perfect timing and spot-on imitations of Old Hollywood actors (and actresses!). Don is a singer by profession, but always finds time to write! You can visit his personal blog here.

Education: obtained a degree in Sport Journalism at the University of East London, but decided to pursue singing and writing instead

Favourite Books: Mike and Psmith by PG Wodehouse, The Hardy Boys: The Melted Coins by Leslie McFarlane, Leave It to Psmith (yes, he really likes Psmith)

Most Influential Authors: P. G. Wodehouse (you were expecting that, weren’t you?), Franklin W. Dixon (that was the pseudonym Leslie McFarlane and his fellow Hardy Boys authors wrote under), Arthur Ransome